Life of a crazy catlady

Year 2014 has been full of loads of surprises, some good, some bad.

The reason why I'll write this in English is that I want to tell you a little story, story like a fairytail and the the story still continues, maybe I should write more in English, we will see.

This year there has been few litters born in our cattery, The first one for this year saw the daylight in March. In site home and the was born my dream kitten, named as Mao, because my dear friends told me that once I need to name them after dictators. Eventually Mao moved to live with Leena & Jari to Jalecat's cattery, the cattery who has a very close co-working with me.

During the summer, we got the litter of Teenage Mutant Ninja Turtles. The hardest litter so far. All the kittens needed to be handfed from day one. I did it, and I was very tired in one point. And we came to conclusion that these kittens will move to my friend Nina with their mom. They survived and they did grow. Until little Don got the intestine blockage, and he needed to me operated. He survived. Gladly. And finally he moved to his new home.

In the beginning of the year, I got to know Veena, the breeded of Attack's cattery in Norway. And her dear friend Carolynn. Later, we decided that I'll have a kitten from the. And in August I travelled to Norway for show and to pick up Gollum. And I also fell in love with his father, Hidalgo.
On that trip I didn't only got a kitten to go home with, I also got two new "best friends". People I like a lot and breeders with whom I have plans for future. And also "maybe" answer to have one of the biggest oriental I have ever seen, Hidalgo.

One thing lead to another and finally me made a decision, Leo from TMNT litter will move to be Carolynn's and her daughter's Cassy's cat and will be part of Attack's breeding program later. And we arranged a trip to Denmark to do "cat change" and have a little bit of holiday.

This happened in the end of November. I flew to Denmark with Leo, they came by car from Norway. After loads of laughter and fun, I travelled back to Finland on Sunday, WITH Hidalgo.

From day one I saw him, I was in love. I still am. Every day more and more,

He has settled nicely, he's my sleeping buddy, kitten sitter, my soulmate, big time. All of my cats mean loads to me, so does Hidalgo,

I am the happiest girl in the world to have my furry family. The ones who make me smile every day. And comfort me on day when I feel very sad. 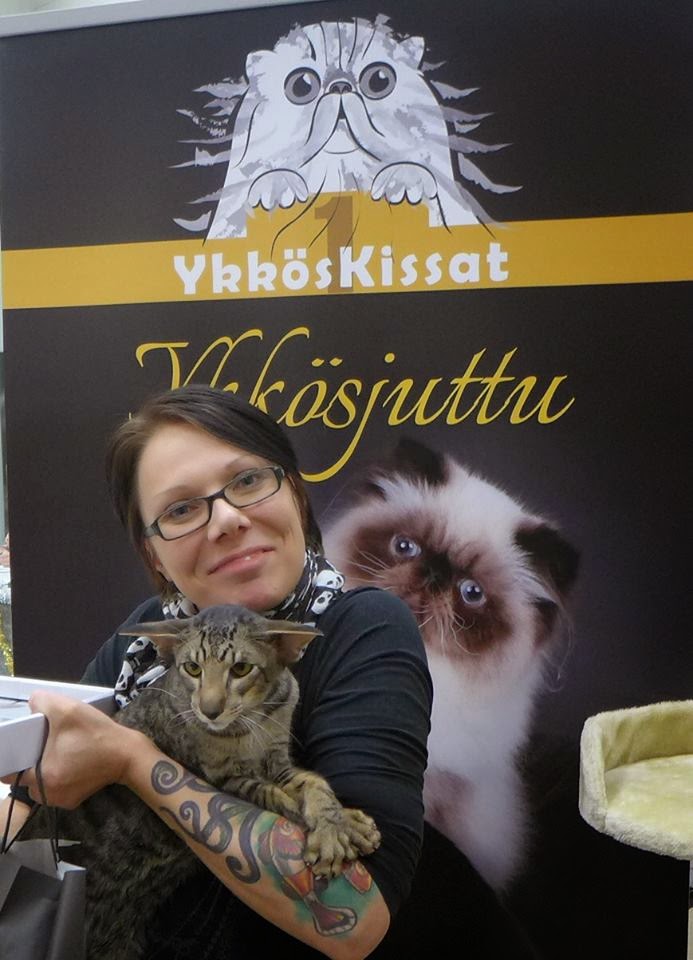